During the first phase of CDOP, an end-to-end validation approach has been designed and demonstrated for GOME-2 NO2 total and tropospheric column measurements. In compliance with international QA/QC standards, the idea is to evaluate independently all critical individual components of the level-1-to-2 retrieval chain. Evaluations are carried out by means of a suite of correlative observations performed by complementary ground-based and satellite instruments supported by radiative transfer and chemical-transport modelling tools.

To ensure that the final product of such a complex production chain is validated meaningfully, validations cannot be limited to comparisons with correlative measurements of the final total column data. An end-to-end validation of critical individual components of the level-1-to-2 retrieval chain has been set up, e.g. to detect uncertainties affecting intermediate parameters but possibly cancelling each other in the final data product. 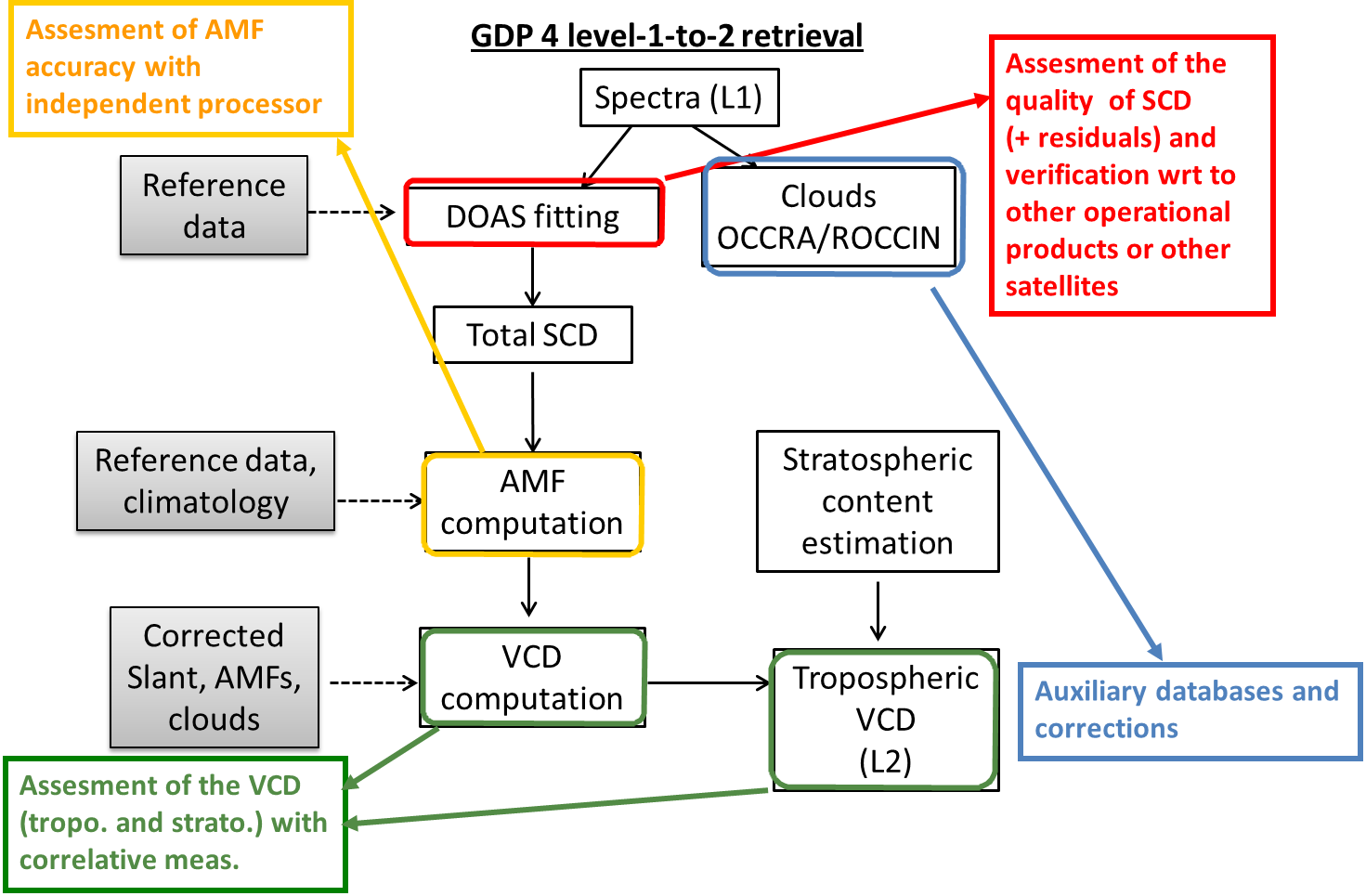 E.g., for NO2, the end-to-end validation approach consists in: (a) an assessment of the quality of GOME-2 DOAS analysis results, by confrontation of GDP 4.7 retrievals performed respectively on GOME-2A and GOME-2B spectra, both on an orbit-to-orbit base and time-series comparisons, and by confrontation of GDP 4.7 retrievals with GOME-2 retrievals of the scientific data processor TEMIS (b) an assessment of the geophysical validity of total/stratospheric column measurements by comparison with stratospheric column measurements provided by zenith-sky DOAS UV-visible spectrometers affiliated with the Network for the Detection of Atmospheric Composition Change (NDACC); and (c) an assessment of the validity of the GOME-2B tropospheric NO2 column data, with respect to MAX-DOAS observations performed by BIRA-IASB at OHP (France) and Beijing (P.R. China), and comparing them to GOME-2A results.

The end-to-end approach to GOME-2 NO2 validation is detailed in the MetOp-A validation report (NO2 O3MSAF VR 2011) and in Valks et al. (2011), where the validation protocol has been described and illustrated at the OHP pilot station.

During CDOP-2, this precursor trace gas validation system will be significantly enhanced to cover a number of additional gases measured by the GOME-2 and IASI sensors (NO2, BrO, HCHO, SO2, glyoxal, HNO3 and OClO) on board of the three EUMETSAT MetOp platforms.

More precise information about the application of this protocol to other trace gases can be found in the following pages: